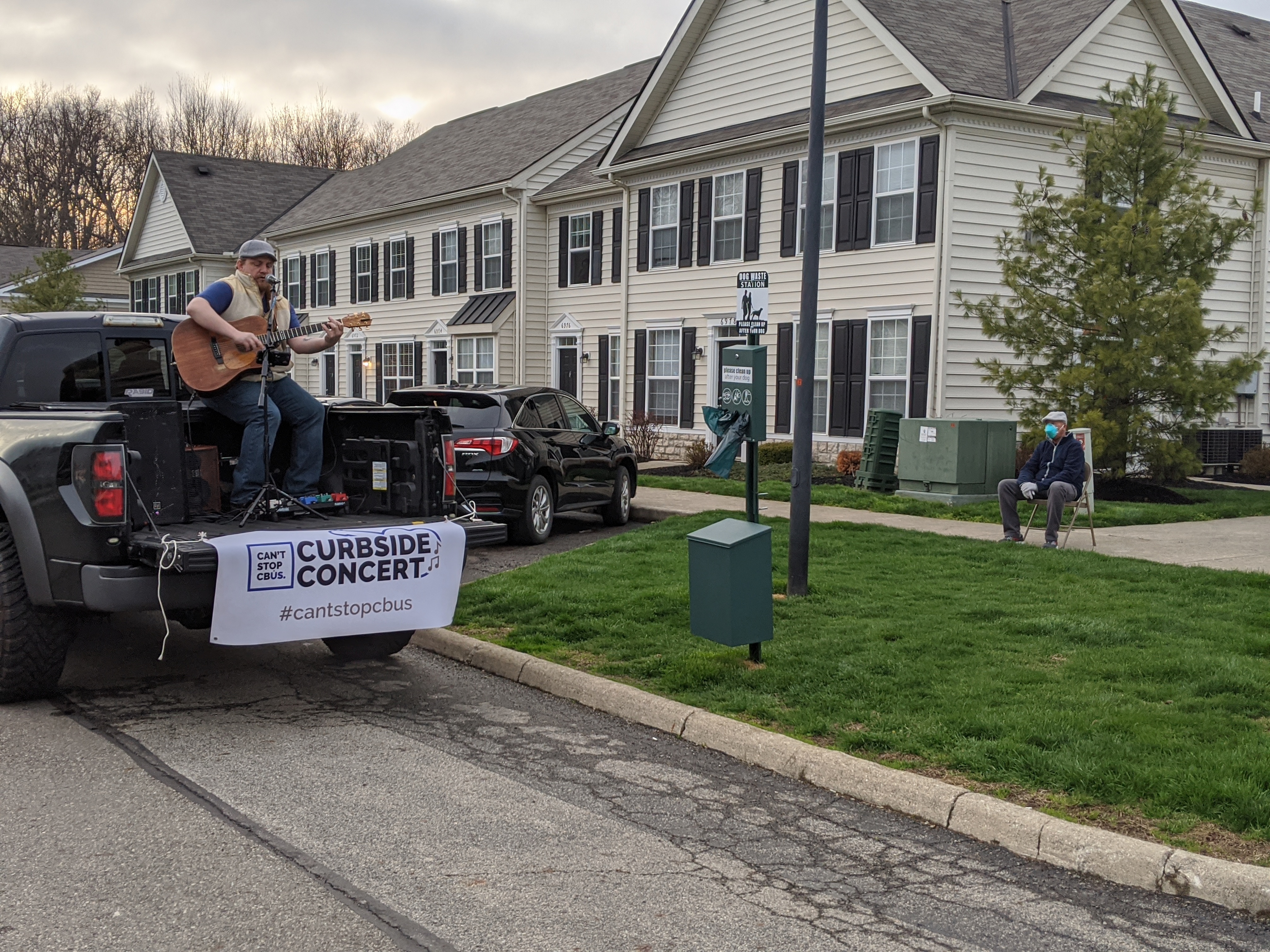 Truckbound concert series reaches the city’s most vulnerable with music

The chances are, you’ve seen live music performed in venues of all sorts. From the historic Pabst Theater, to outdoors on the shore of Lake Michigan, to a sweaty mosphit in your second cousin’s basement.

Somewhere most of us have likely never seen live music though, is in the bed of a pickup truck while it’s parked outside your front door. But the Curbside Concert Series is trying to change that.

Organized by Can’t Stop CBUS —a group that formed this March with a viral tweet and aims to connect and better the city of Columbus through a series of community projects— the series brings 10-15 minutes performances to the homes of elderly Columbus residents in order to foster community spirit and unity in those who may need it most.

According to a statement from Can’t Stop CBUS, the goal of the series is “To create much much-needed moments of levity and connection for our elder neighbors,” for older Columbus residents “Who might not connect with others online through video chats or live events the same way that the digital natives of younger generations do.”

Friends or loved ones of elderly Columbus residents can request a concert online for a couple or individual they believe would benefit, and if selected their home (or assisted living facility) will be included as a stop on the four hour concert shifts musicians undertake Friday through Sunday every week. Those requesting a concert are even able to request a specific style of music and add a personal message that’s delivered from the performer

And for Curbside Concert musician Amber Knicole those moments of levity are very real indeed. “There’s a moment where you can actually see people light up. They’re so grateful,” she said. “There’s so much going on in our lives right now, and to see people let some of that go for even a few minutes is amazing.”

Knicole — who also serves as the vocalist for Columbus neo-funk group Mojoflo—actually began her tenure with the concert series as a driver before taking on performances as well. “I’ve always been familiar with larger vehicles, so I was able to step right in.”

Musicians are carted throughout the city on the flatbed of a glossy, slate-gray Ford F-150 donated by Ricart Automotive and fully equipped with a battery-powered speaker system. And while this allows the music to quite literally show up at your door, according to Columbus artist Steven Paxton, it presents a unique set of challenges as well.

“You’re always trying to find the right spot to park, because that matters,” Paxton said. “And last week it didn’t rain so everyone was outside mowing their lawn. That kind of stuff can get in the way.”

He ultimately sees the truckbound performances as being able to reach Columbus citizens in a unique and compelling fashion. “One elderly lady was confined to her bed and she wasn’t able to come outside, so we pulled up right beside her window.” And it’s moments like this where he says the spirit of the series shines through at its brightest.

“The response we get is great, people just light up. They’ll often come out of their houses or the houses nearby, or out into the parking lot. It seems like everyone is just glad to have the interaction.”

Last weekend, Paxton even got to put a show for one of his biggest fans: his own Dad. “It was nice, this last week we ended our set earlier and was close to where my Dad lived, so we stopped by and did an extra show for him in Groveport,” he said.

And while there’s not much you can do in the bed of an F-150, the series has been able to show off a nice cross-section of musical talent. While Paxton sings and plays keyboard as accompaniment, others will bring a guitar. Fisher only performs vocally, but she finds a way to make things interesting by singing over pre-recorded backing tracks to songs. “I try to find the ones that are the least amount of cheesy,” she says laughing. “But sometimes with covers you can find a track that really presents the song in a different way, which people appreciate.”

And the Curbside Concert Series benefits more than just those who hear the shows. One of the sponsors of the concert series, the Great Columbus Arts Council, pays artists for their performances.

“Being a full time musician means you need to have about six part time music jobs. Now, most of the venues are closed, so anything like this we can find  is even more important,” Paxton said. “It really is a blessing.”